Yesterday was a really hot day.

Exhausted and looking forward to an ice cold beer, I looked down at my phone as I took the final steps towards the gastropub where I had scheduled my last two meetings of the day.

An unusual thought caught me by surprise, “Boy, does my phone look stunning or what?!”

Never did I think I’d have these words to say about a Samsung phone, but today, I was basking in the sheer beauty of the shiny, new Galaxy S6 Edge.

It’s been a long time coming, but let’s back track a bit. While it’s been the dominant force in the smartphone industry for many years now, Samsung has never been famous for superior design. If we’re talking about adjectives – thin, light, innovative, and sturdy are some of the words journalists have thrown around. Pretty, maybe. But stunning? Not in a million years.

Previous top-of-the-line Galaxy models have been, for the most part, utilitarian — technically superior and reliable, but consistently victimized by bad design and inferior materials.

In fact, if there’s one word most frequently used to describe any of the S6’s predecessors it would be “plasticky”.  That’s not always a bad thing, the plastic back plates of previous Galaxy S phones were removable, allowing users to swap out dead batteries for new ones; and with a molecular resilience that provided more immunity to accidental drops.

This year’s Galaxy S flagship is a huge departure from that synthetic material that has for many years defined the Samsung brand. If you’ve owned a previous model, the S6 and its curvier twin the S6 Edge will feel like imposters. It’s delightfully confusing! 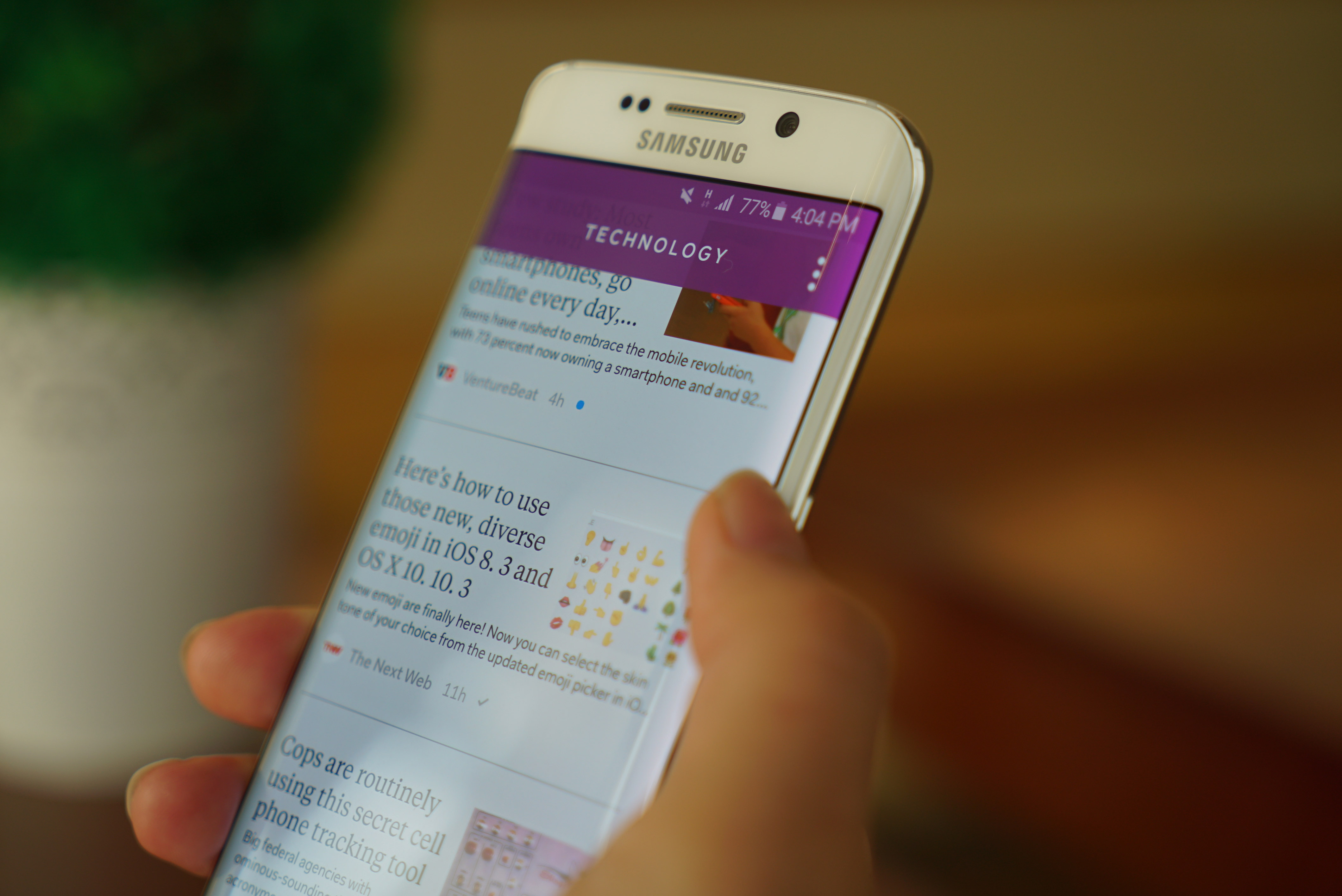 With its curved display that tricks the eye into thinking it wraps around the phone, a glass back with an iridescent undercoat that glistens under the sun, and a matte aluminum trim with hardly a speckle, the S6 Edge is the better looking twin, and the most beautiful smartphone Samsung has built to date.

Its sibling, the S6, is its equal in every other respect apart from a display that slopes downwards on both sides. The $100 premium gives you a phone with an aesthetic edge (pun intended), a slightly better battery, and nice-to-have conversation starters, like sides that glow with pulsating neon lights when someone you’ve marked as a favorite calls. 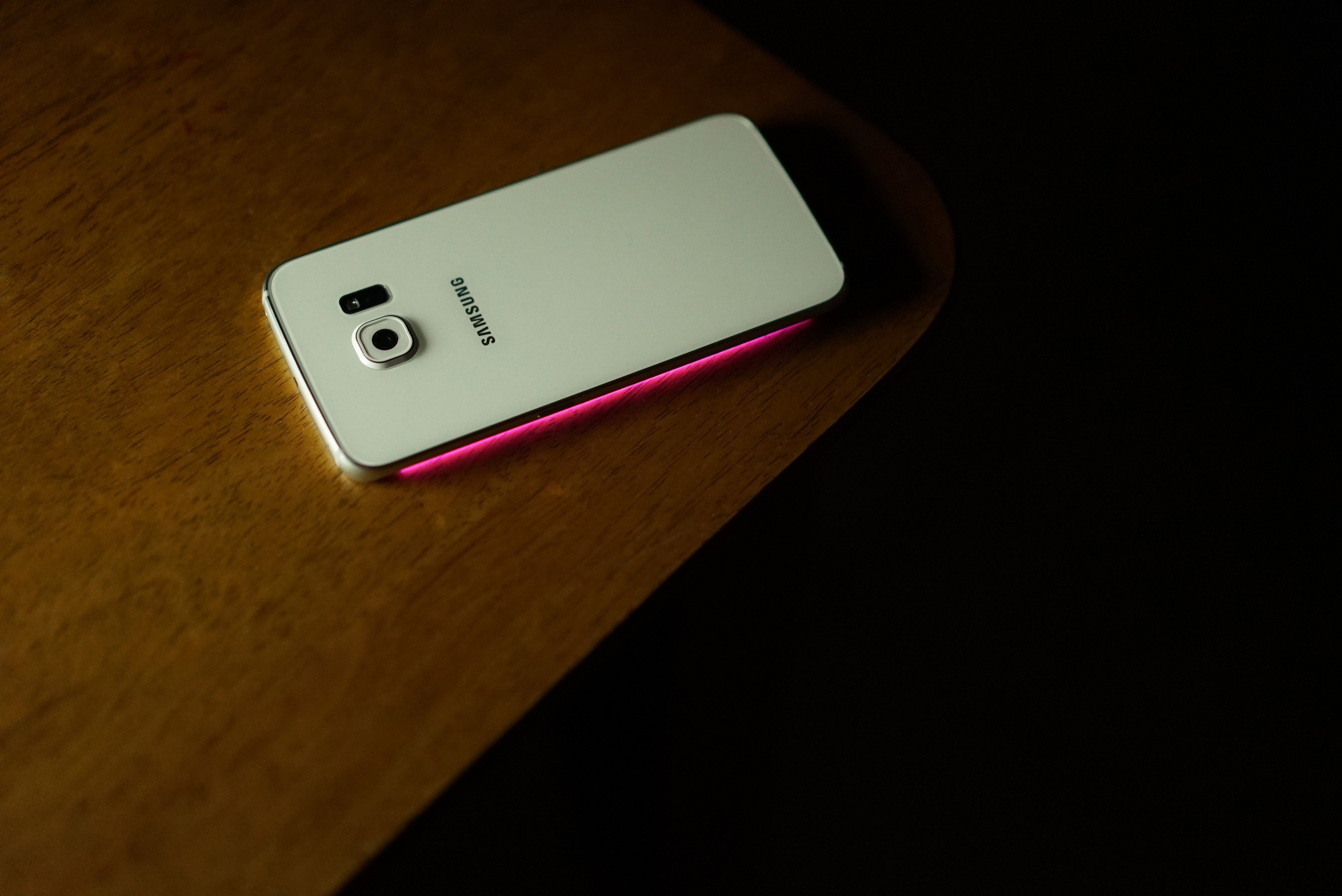 Of course everything comes at a price, and these design improvements come at the expense of features that were present in their predecessor the S5. Both the S6 and S6 Edge are not waterproof, do not have removable batteries, and are without provisions for expandable memory. But neither does last year’s best selling smartphone.

Still, critics are quick to call this transformation “iPhonesque.” The similarities to Apple’s iconic smartphone however, begin and end at the bottom of the phone, where the S6 and S6 Edge have similarly placed headphone jacks, cable ports, and laser-etched speaker grills.

Sure an older version of the iPhone was made of glass and aluminum too, but none of these design changes are unique to Apple. In fact much still comes straight out of Samsung’s playbook, like the phone’s shape, which is undeniably Samsung. 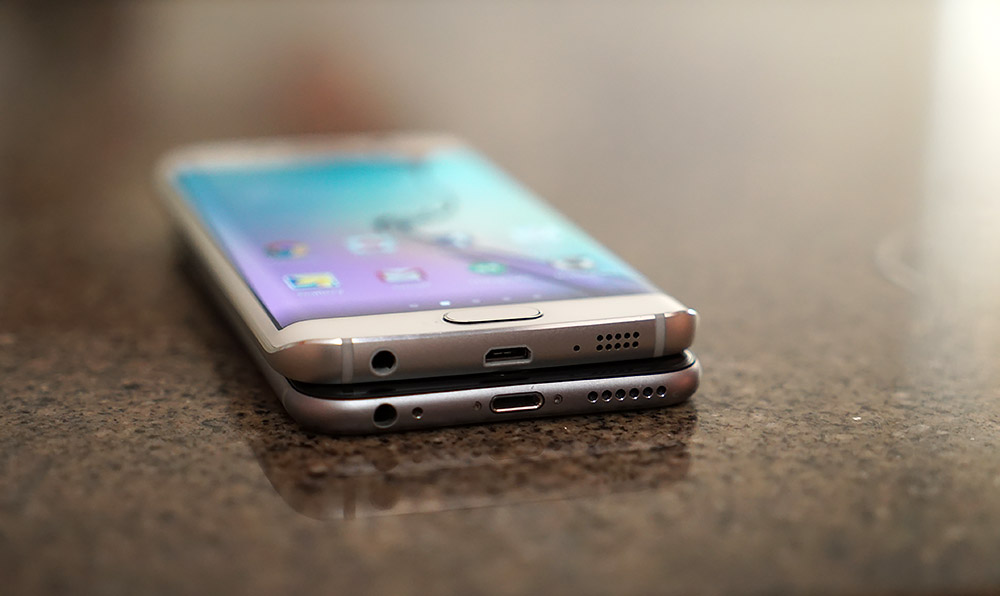 Also familiar is the capsule-shaped home button with an improved fingerprint scanner that consistently works – if you’ve had the S5 you’ll understand my pain! Previously you’d have to swipe your fingers across the home button to register a print. Now just rest your thumb on it and in half the time that it takes to press down on the button, your phone is unlocked.

The home button is also central to the phone’s best feature – instant camera access. Two clicks down on the home button and the camera is ready to go. It takes just under a second and it’ll work from any app, the lockscreen, or even when your display is turned off. 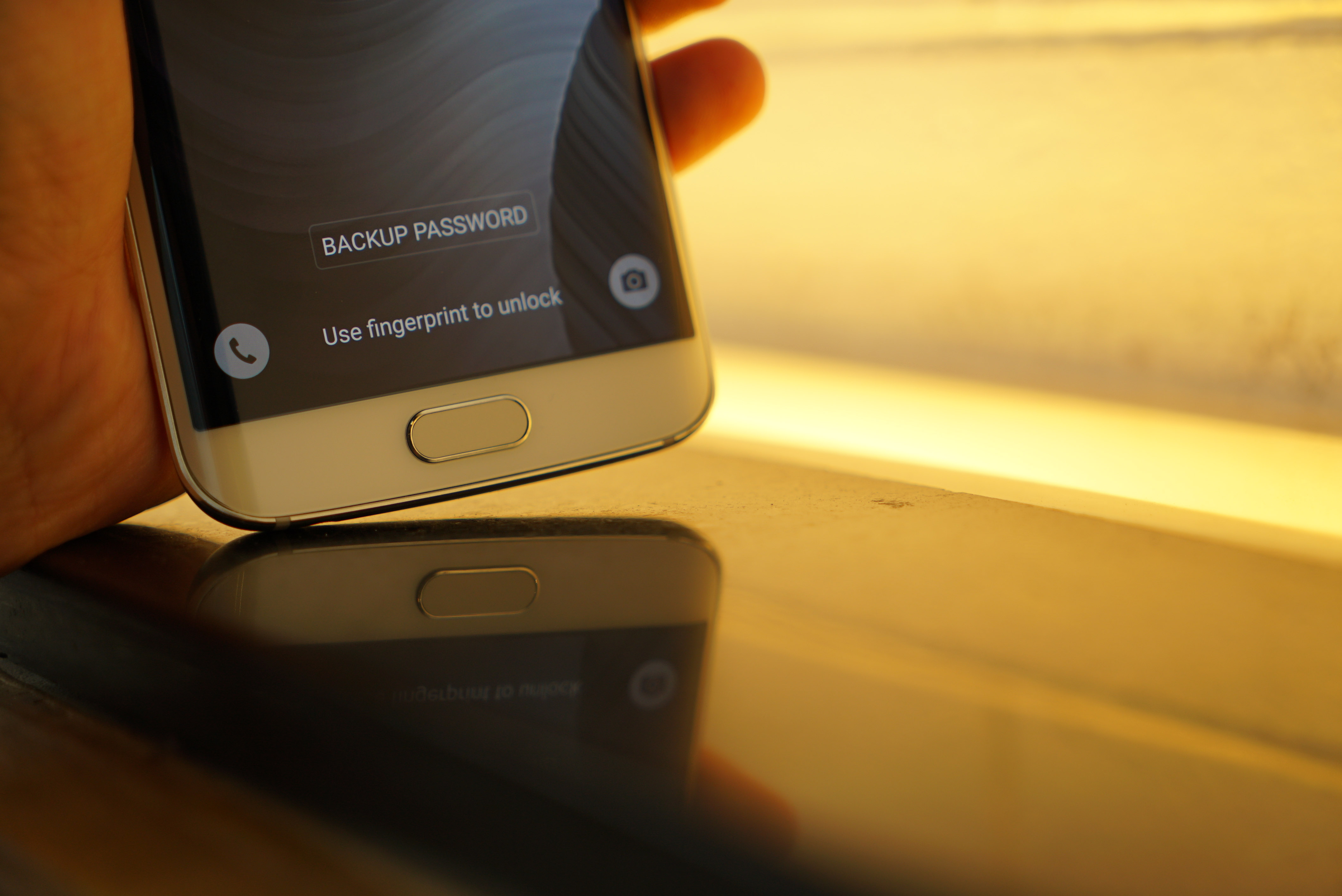 Knowing that you can reliably and instantaneously fire up your smartphone camera is a god-send and a key feature there’s no turning back from. After a few days I found myself double clicking on my iPhone’s home button to different results.

The feature is particularly essential because the S6 comes with an amazing camera you’ll want to use often. After a week of testing, the phone has consistently shot great 16 megapixel images across all lighting conditions. Focusing is fast, the interface unencumbered by complex menus, and with a reliable auto mode that’s good enough for most users. 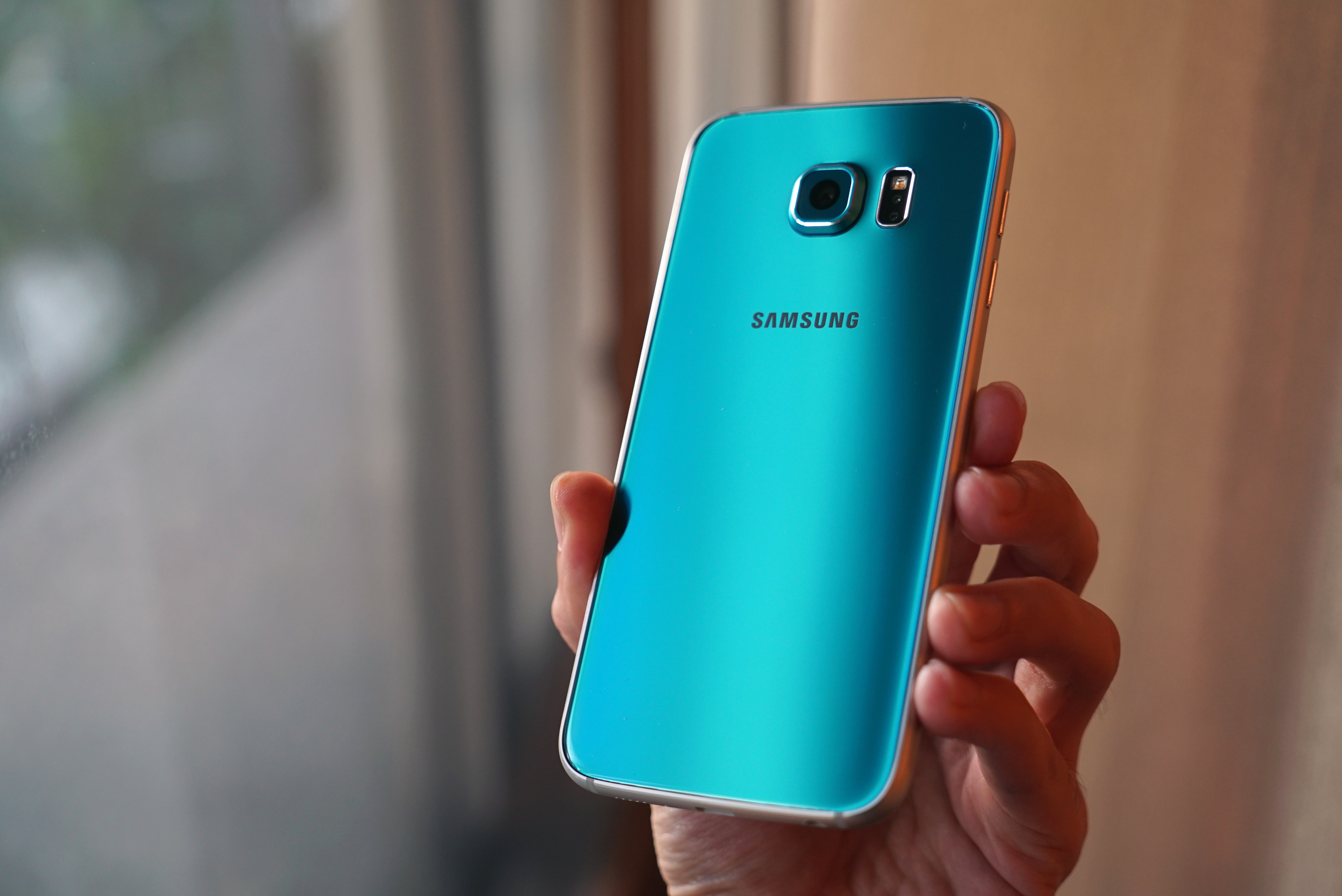 Its 5-megapixel, wide-angle, front facing camera is also pretty impressive and is sure to please any selfie lover. You can fit in more people, or more of yourself, and if you feel the need to, there are built-in filters that are kinder on your “imperfections”.

I particularly like that you can also use the heart rate monitor as a shutter button. No awkward circus tricks, balancing the phone with four fingers, while keeping the thumb free to tap capture. Instead rest your index finger over the heart rate monitor (on the back of your phone) and snap, you’ve just taken a selfie.

This heart rate monitor, an S5 feature, works in conjunction with Samsung’s own S-Health app, one of the better remnants of the old Samsung way of doing things – bundled applications and features (S-View, S-Note, S-Chat) that you’ll never ever use but can’t ever uninstall.

In the S6, Samsung’s implementation of Android is much more restrained. Called TouchWiz, this Samsung twist on Android was once a sore spot on an otherwise great phone. It’s not just Samsung’s problem – phone manufacturers, in an attempt to give their respective smartphones differentiating user experiences, build an unnecessary layer of customizations over Android. The results are usually experience debilitating.

Thankfully this version of TouchWiz is simpler and cleaner than ever. The phone still ships with bloatware, but with a few taps you can disable them forever.

Because the S6 is Samsung’s most premium smartphone, expect nothing less than the most high-end specs. I could rattle them off…an octa-core processor, 3GB of RAM, and an impressive 5.1-inch QHD display that has more pixels than even the most discerning eye can distinguish. But at the end of the day what you need to know is that the phone is lightning fast, every action feels responsive and snappy.

Despite all this power and functionality however, the battery on the S6 Edge got me through 10 to 12 hours of heavy use. That’s enough to almost get through the work day and back home. Samsung says it’s innovating by supporting two popular wireless charging standards –  meaning it should work with most if not all of the wireless charging accessories out there, and without the need for a special case.

For me the true innovation however, is fast charging. At the end of the work day, right before you leave the office, just plug your phone in for 10 minutes and you’re guaranteed 4 more hours of battery life – or keep it plugged in for 20 minutes more and you’ll get to 50% capacity.

Two years ago, give or take a few days, I was in snowy New York covering the launch of the Galaxy S4. There was so much hype about this phone because its predecessor had broken new ground, cementing Samsung’s place as the new global smartphone leader. Inside the press briefing room, while my heart thumped with anticipation, I wondered if I was about to go up close and personal with a Samsung phone I could wholeheartedly recommend – a phone without any major but or if only.

Unfortunately the S4 was a letdown and so was S5 that came a year after, excitement turned into disappointment. But just when I had thought all hope was lost, Samsung made an important philosophical change – instead of iterating, it went back to the drawing board and started from scratch.

In 2015, on it’s sixth attempt to finally get it right, Samsung has built an extraordinary phone that’s pretty darn close to perfect. We’ve got a keeper on our hands, not only is it currently the best Android smartphone money can buy, it has more than enough to give the iPhone a run for its money.

“Samsung Galaxy S6 review: Pretty darn amazing” was first published in The Philippine Star on April 13, 2015 as part of my regular Gadget Week column. The Philippine Star Technology Section is printed every Monday, and is also available as a digital download from digitaledition.philstar.com.