There’s a hallway at the Electronic Entertainment Expo that’s green on one side, blue on the other. The path in between it is like a fashion show runway, and each day, at the world’s biggest gaming event, thousands walk through with the same thought in mind, “Xbox or Playstation?”

Like PC vs Mac or iOS vs Android, Xbox vs Playstation is one of the tech world’s greatest rivalries, and here at E3 is where it all gets real. Three years into the product cycles of the Xbox One and PlayStation 4 respectively, creators Microsoft and Sony are ramping up their respective game lineups. While tech media is obsessed with sales figures, it’s the lucrative games market where companies make the most profit, and so at this event, all the best games are previewed.

I’m no serious gamer by any stretch of the imagination, in fact while explaining this to a fellow who had just seen me, quite lousily preview the much anticipated first person shooter Halo 5, I was told, “That’s pretty obvious.”

But it doesn’t take a gamer to appreciate the spectacle that is E3. It’s almost like Disneyland, maybe even better.

Unlike your average tech event where only a few tech giants come to wow with massive, high-tech booths, at E3, a glance in any direction is bound to be captivating. Massive multi-color billboards scream “Check me out!”, theme music blasts from invisible speakers, and video game characters abound — either super sized and inanimate or real life reincarnations of cult favorites. And like Disneyland there are also long queues at booths offering gamers a chance to sample the latest offerings, complete with signs that remind you that wait times are well over an hour. 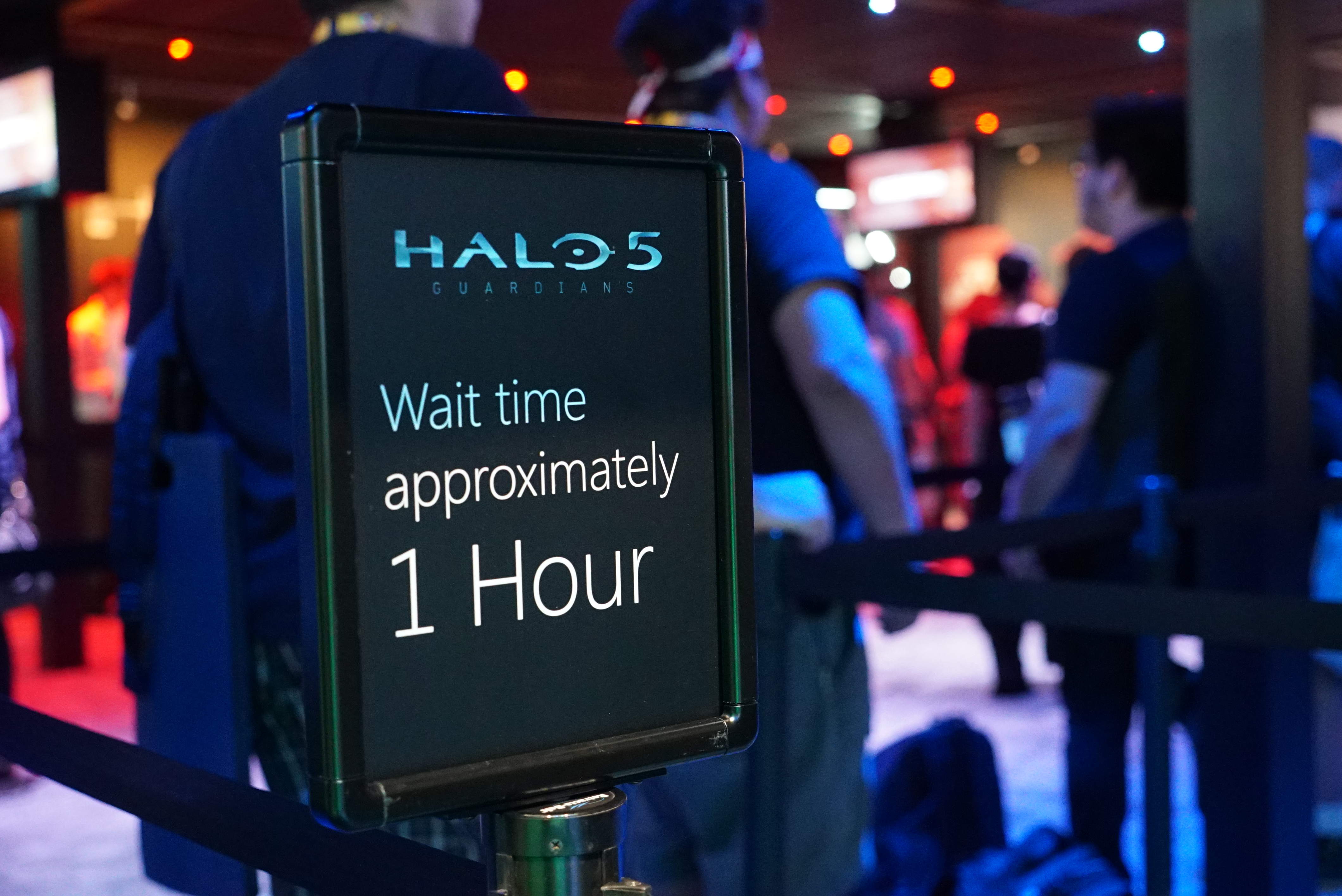 Lines are massive because most of these games won’t ship till the holiday season, some not till next year, but here at E3 you can sample them all. And really, at its core, that’s what E3 is all about – getting the community excited about the next wave of mobile, computer, and console games.

I could try, but there are way too many exciting titles to mention. Microsoft for example is calling its lineup the greatest in Xbox history with titles like Halo 5 Guardians, Fallout 4 and the next Lara Croft game – Rise of the Tomb Raider on the horizon. 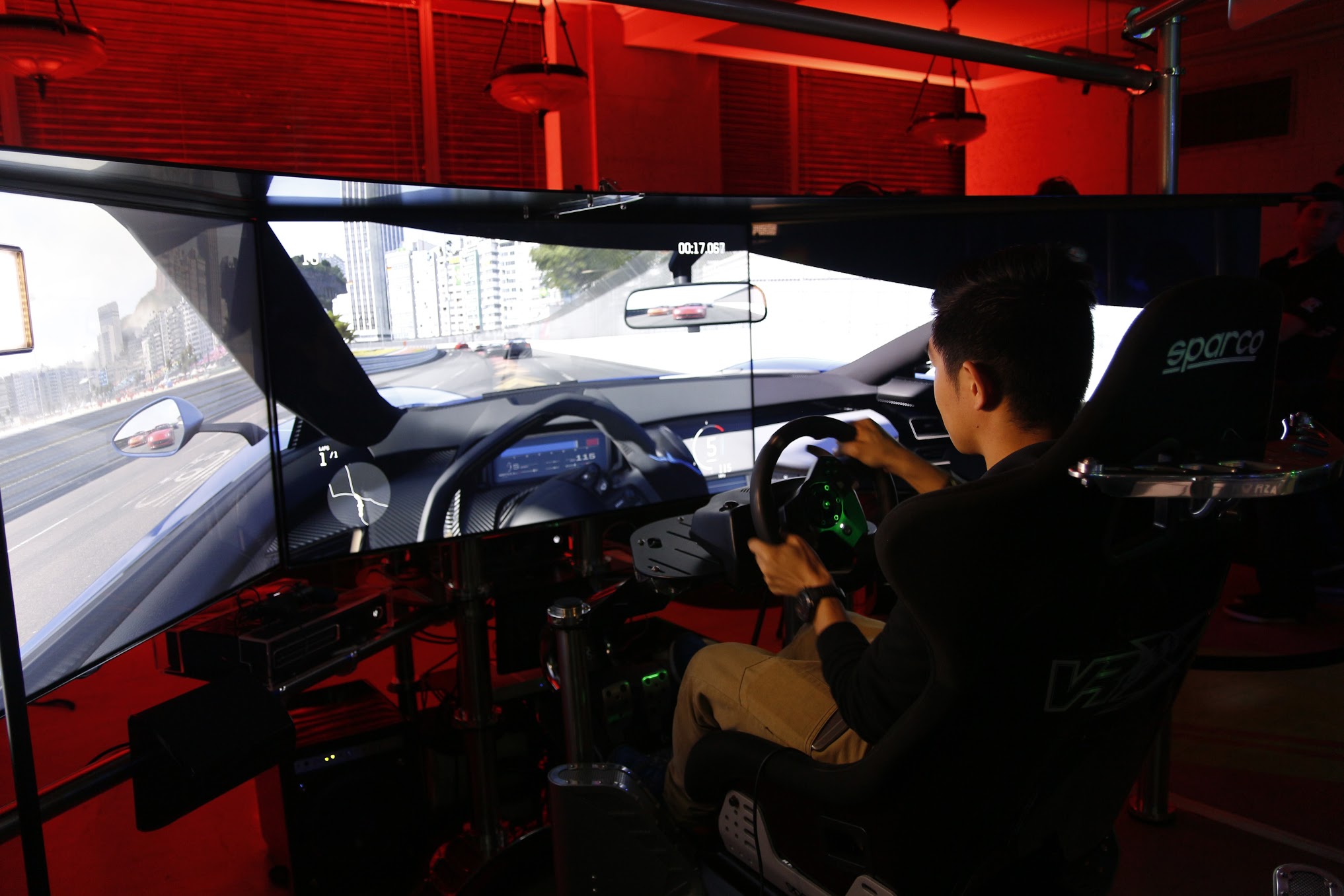 I particularly enjoyed playing the racing game Forza 6, connected to this custom rig that let me feel every bump and crash. The elevated level of game play is heightened with the addition of elements like rain, that require players to take a more tactical approach to gameplay. My virtual Ford GT was beat up bad, and after my disappointing 22nd place finish, I felt like I needed to be checked for whiplash.

Apart from new immersive experiences that require strategic thinking, developments in technology have also enabled games to look more and more like art pieces. At the X-Box briefing, I had to double take a couple of times when several game trailers made their global debut. Was I watching a movie trailer or was I seeing actual gameplay? In 2015, many games will feel like you’re in an actual film. 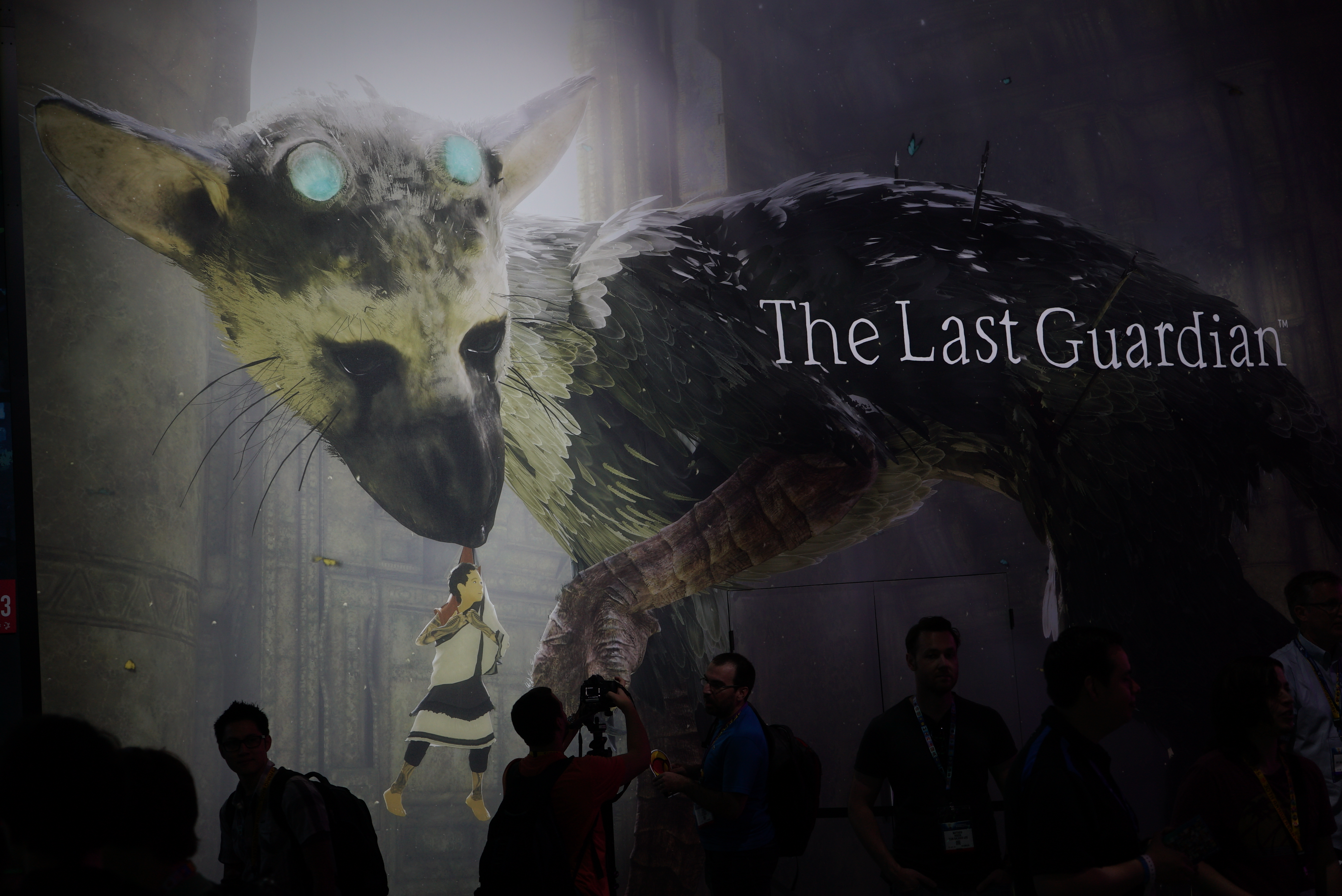 Not everything is hyper realistic though, like the insanely difficult Cuphead that’s reminiscent of a 1930s animated classic, or The Last Guardian, a game which took 8 years to develop, which looks more like an art piece.

And then there are also modern takes on old classics. Fans went crazy when they heard Final Fantasy 7 was getting a remake, the update to the classic PlayStation game will bring it up to par with the graphics developments of recent years. Nintendo is also rebooting the space shooting game Starfox (StarFox Zero) and is giving Mario lovers the ability to design their own custom levels in Mario Maker. We saw glimpses of the insane, Mario-levels-from-hell at the Nintendo World Championships and then attempted to finish them at the Nintendo booth, please don’t ask how I fared.

Any 80s kid will also love the new Mighty No. 9 from Keiji Inafune the Japanese creator of the retro-classic MegaMan. At a special after-hours event, where journalists, YouTubers and other influencers are invited back to play sans the big crowds, I spent most of my time reliving the modern day take on MegaMan, only to realize after the fact, that Inafune had been watching from the sidelines. While the massive cheers that welcomed the game announcement is an indication of how big a deal this was, I was oblivious to the whole thing going down, and thankfully so, I couldn’t see how my performance could have gotten any worse with the added pressure.

When I get home I’m adding “brush up on gaming skills” to my to do list, not just because I suck, or because there are a lot of exciting new games to play, but because the future of gaming has much more in store not just for gamers but for all of us, and being a part of it today guarantees that I can experience the future now.

At E3 2015 everyone was talking about virtual reality. I imagine a not too distant future where VR headsets will find many more everyday use cases, but for now, it makes perfect sense to pursue VR technology in the context of gaming.

Oculus, one of the leading VR companies, promises consumers will finally be able to buy their virtual reality headset the Oculus Rift early next year, while Sony has yet to make any announcements about the commercial release of its own VR headset, Project Morpheus. Both headsets were at E3, and the demand for hands-on slots was through the roof, before the end of the first day, all slots had been booked. 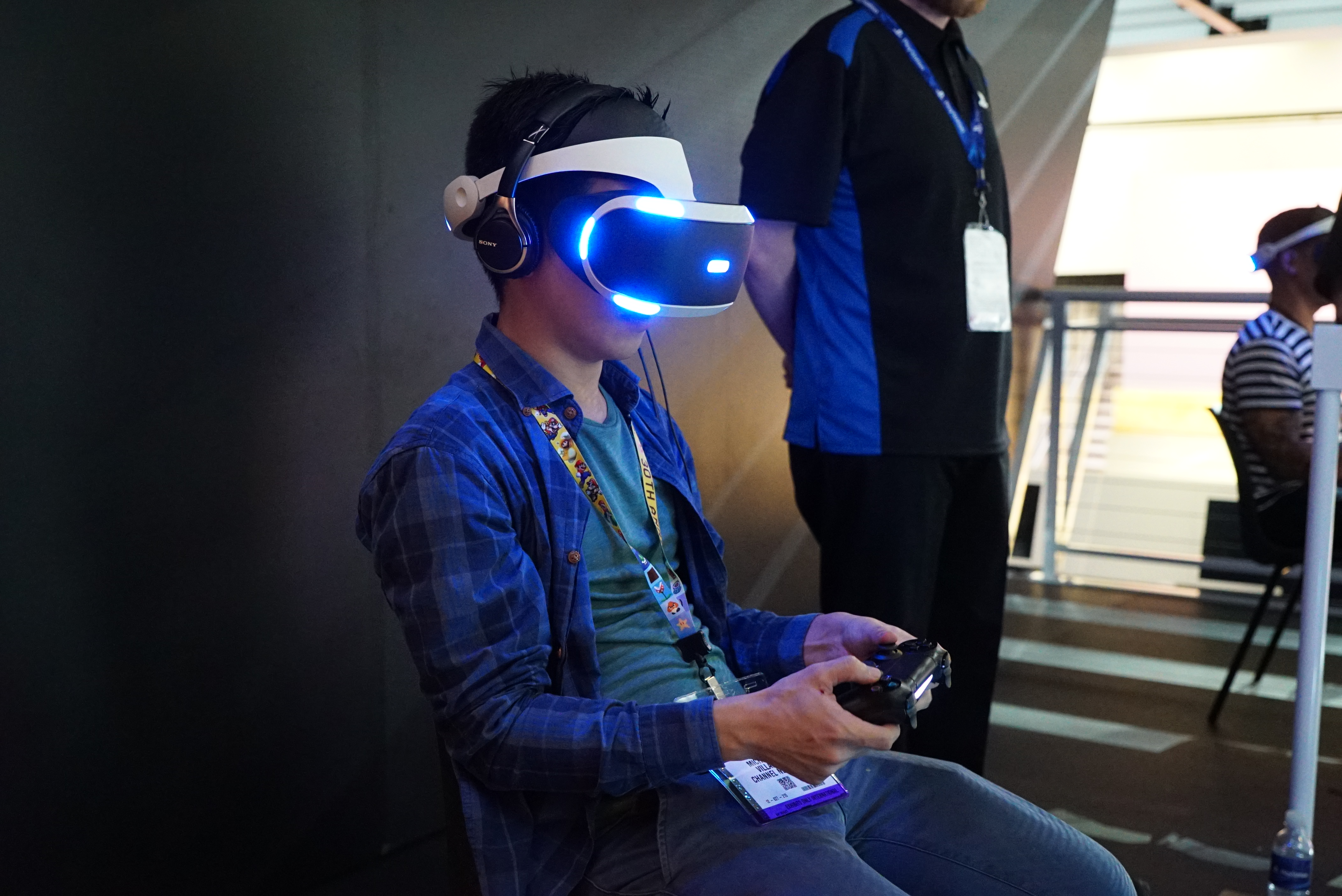 We were lucky enough to try both headsets on for size. The Project Morpheus headset is like a cross between RoboCop’s head and a motorcycle helmet. The helmet glowed with blue light as I flew a space plane through obstacles and fired down at square tiles blocking my path. While the less flashy Rift was the more superior of the two. It fit right, felt great, and tricked your mind into feeling in-game sensations. In the Edge of Nowhere I was running across a steep bridge atop an icy mountain path that had sections descending into the abyss below. I felt the queasiness that you get from being in a high place, certain times I felt my chair was moving. But it was all a mind trick, a testament to completely immersive experience the Rift had created for me. For a change I was in the game, not looking at it from a distance.

Despite not being that good in the genres of first person shooters (Halo), racing (Forza), or platformers (Mighty No. 9) I’d like to think that I’m pretty good at Minecraft. I’ve played for years, and have built my own empire of sorts. This Sweden-born block-style building and exploring game is now a Microsoft property, and the tech giant is using it to tease efforts in its holographic computing project Holo Lens. 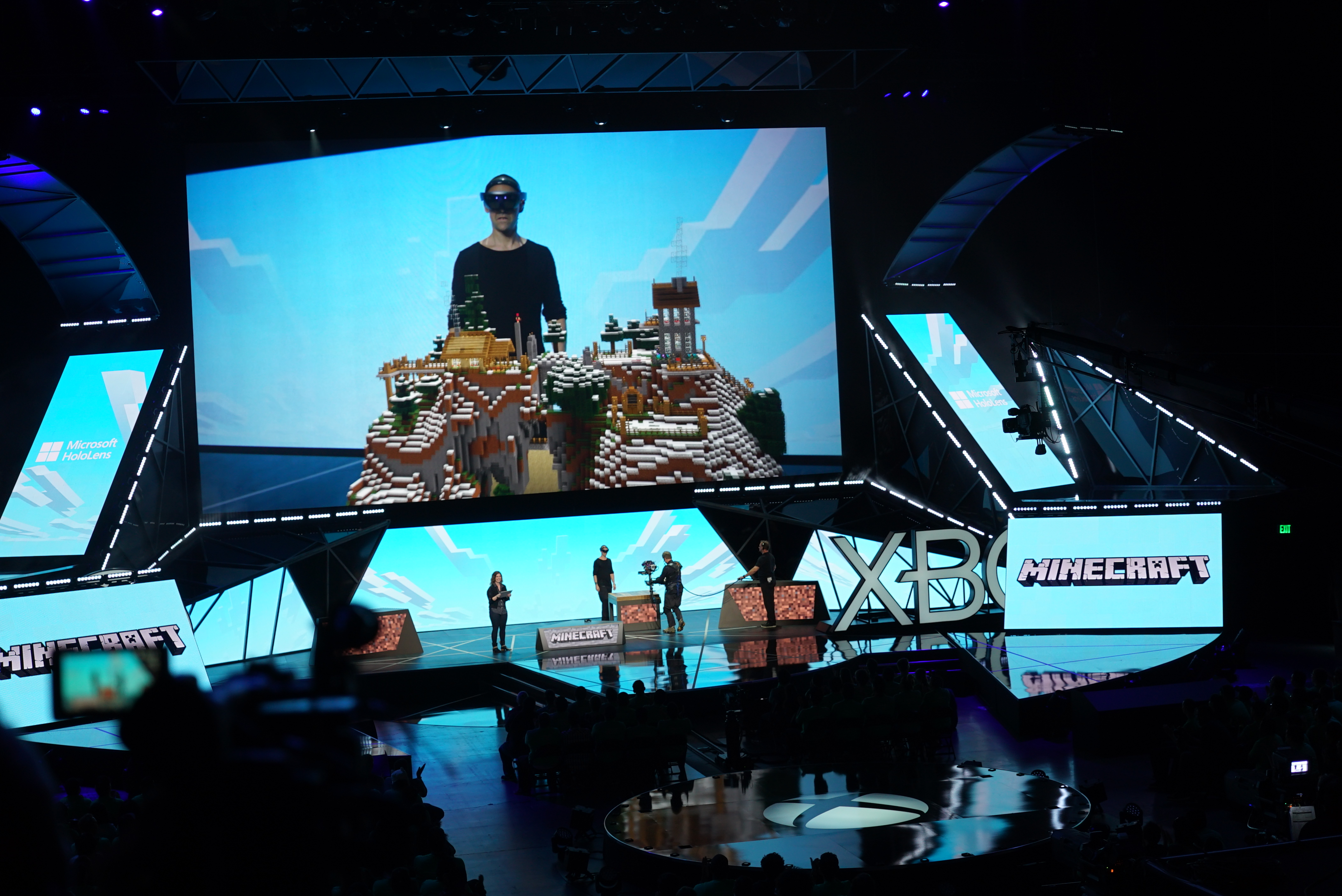 If I could pick just one highlight from E3 it would be Microsoft’s Holo Lens Minecraft demo. We stared transfixed as the virtual Minecraft world was plucked out of the screen and plopped onto a table in the real world. Special cameras allowed the audience to see what the man with the Holo Lens was seeing. This is Augmented Reality, and in a way, it runs counterpoint to the VR trend, instead of being teleported into another world, this was about bringing the virtual world into our physical one and being able to interact with it like physical objects, it was amazing!

Holo Lens wasn’t ready to be shown off to the E3 going public. But it represents a vision of what’s to come. While there were other trends at E3 like Xbox Elite game controller that allows users to swap hardware buttons to match their style of game play, and the move towards being able to play the same game across multiple devices and screens, it was this giant leap into the world of gaming and beyond that’s captivated the imagination of this gamer wannabe. I can’t wait for the next E3.