Are you ready for the Apple Watch?

There’s no other moment in tech history like that fateful day in June 2007 when Apple unveiled the original iPhone. It was a pivotal moment that would change the world forever, that singular moment in time that ushered in the smartphone revolution.

Since then, we’ve waited for the next big thing, the next revolutionary invention that would push the world forward. We’ve seen glimpses coming out of Google’s top-secret Google X labs. Products like Google Glass and self driving cars – neither of which are ready for prime time.

And so, when rumors of an Apple smartwatch hit critical mass in 2012, it captivated the hearts and imagination of techies like me. We waited with feverish anticipation, dubbing it the iWatch, but Apple events came and went without any sign of one.

Ironically, two years later in June of 2014, it was Google that was first to launch a smartwatch platform, Android Wear – alongside two readily available smartwatches from Samsung and LG and an even more lust-worthy model from Motorola waiting in the wings.

It wasn’t until 3 months later that Apple belatedly got with the program. Christened the Apple Watch, Cupertino’s unique take on what watches of the future should be, was at most satisfactory, but enough to sustain another 6 month wait. It wasn’t ready yet.

While a handful of early adopters (including myself) bought Android Wear smartwatches, the majority held off, waiting for Apple’s savior to come.

Blame Google and Android Wear for not creating as big a dent in the market as it should have. Or credit Apple for its innate ability to market its way through any crisis.

Last week, following big announcements from rivals like Samsung, HTC and Huawei it was Apple’s turn in the spotlight. In front of several hundred hand-picked journalists at its “Spring Forward” event in San Francisco, several big questions were finally answered, like what exactly does it do, how much and when.

So how smart is this smart watch?

Apart from being able to tell the time, the Apple Watch can do many other things including communicate. When paired with an iPhone 5, 5C, 5S, 6 or 6 Plus you can answer calls, send and receive text messages and emails, You can dictate replies and send them as audio files or text, or use the touch screen to send sketches, taps, and even heartbeats – the last 3 sound more gimmicky than useful, Apple’s calling it “saying it with feelings.” Behind it though is new technology called Force Touch a super sensitive touch screen that can differentiate between soft and hard taps and vary functions accordingly.

Like most other wearable device out there, the Apple Watch is also a fitness tracker. There are a host of sensors built-into the device that can measure your heart rate, steps taken, amount of physical activity, calories burned, and whether or not you’ve been sitting for way too long. All of this data is presented in a visually appealing Activity App that is so pretty it begs to be used. There’s also a Workout App that keeps you motivated, gives you live progress updates when you’re running or cycling, and a summary of milestones. Both apps sync with an iPhone companion app so you can view trends over time, and theoretically make better fitness related decisions.

Superior to Android Wear are the selection of apps pre-installed on the Apple Watch plus those available from the App Store. The iPhone’s personal digital assistant Siri is built in, plus a few other iPhone regulars like Maps, Music and Photos. The latter two let you control music and view photos stored on your iPhone respectively.  But it’s really the add-ons that excite me – browse through your Facbeook, Instagram or Twitter feed right on your watch, call for an Uber, check-into an American Airlines flight, or unlock your room at the W. Apple has also built in Apple Pay functionality – a quick double click on a button is all it takes to complete a purchase at supporting establishments.

Perhaps though, its Apple’s ability to come up with meticulously designed products that makes the Apple Watch stand out amidst a sea of smartwatches. From its innovative new home screen that displays a “universe of apps”; its crown, reinvented for the digital age as a home button and navigational controller for scrolling and zooming; its internal Taptic engine that provides subtle feedback; its fancy-looking magnetic charging solution; and in the kinds of materials used.

The standard Apple Watch for example, which sits in between two other variants, is built out of what Apple calls, “no ordinary stainless steel” (cold-forged stainless steel to be exact  – which supposedly makes it 80% harder and gives it a mirror-like finish) and scratch resistant sapphire crystal. 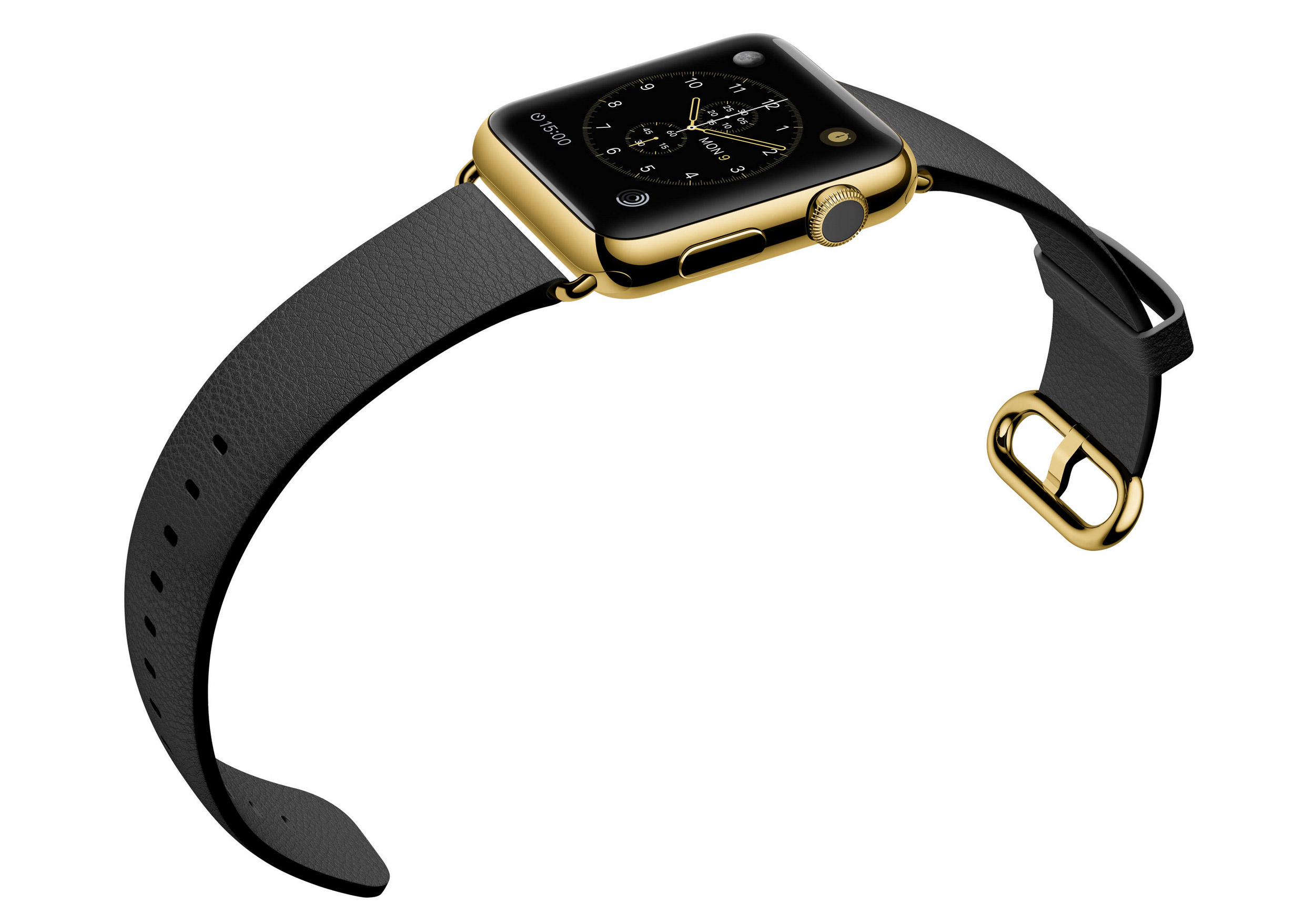 The standard, steel, Apple Watch comes in either 38mm or 42mm wrist sizes with either with a link bracelet, milanese loop, three other leather buckles and a sports band – and range from $549 to $1099.

The intent for it to look like a piece of jewelry is pretty evident, especially if you consider the 18K yellow or rose gold version called the Apple Watch Edition. Priced between $10-17K and available in limited quantities to those who can afford to enjoy the finer things in life, this Apple Watch Edition is perhaps one of, if not the most expensive Apple product that has ever existed.

At a far more (relatively) affordable, and down to earth price tag is the Apple Watch Sport. Starting at $349 the Watch Sport is made of anodized aluminum instead of steel, glass instead of sapphire, and an interchangeable sports band that comes in 5 different colors.

So will the Apple Watch be a game changer like the iPhone? Probably not, but expect Apple with it’s meticulous attention to detail, eye for design, and marketing prowess to push the smartwatch industry forward, even if it was late to the game.

When Google first introduced Android Wear, it pitched the smartwatch as an extension of the smartphone, designed for quick glances. The goal is to be more present – you put your phone away and instead make regular glances at your watch to check for notifications.

The problem is, and speaking as an Android Wear user here, I want my watch to do more than that. And so far, at least with this first crop of devices, I feel like my Moto 360’s main purpose is as a conversation starter – an expensive one.

Then I look at Apple’s vision and what the Apple Watch can already do out of the box. The device while already quite capable (probably more so than any Android Wear powered smartwatch), like many of Apple’s other ballsy risks, is ahead of its time – technology will need to catch up before users can reap its potential benefits.

Apps need to be written, end-to-end health solutions in place, Apple Pay needs to roll out in more countries, and more airlines and hotels globally will need to adapt these new systems that allow for one tap checking-in and hotel room door unlocking. This will happen, but it will take some time.

All things considered, whatever model you pick, it’s still a big price to pay for a first generation device that will most likely be outdated in a year or so. Unlike good old timepieces seen as investments and passed down through generations, even the gold Apple Watch has an expiration date written all over it.

That said, regardless of how its made to look, the Apple Watch is first and foremost a piece of technology, one that has the potential to make life better.

If you’re not in a hurry I’d wait for a review. I on the other hand am a technology journalist – so I guess I have no choice but to buy one. For the greater good. 😉

The Apple Watch is available for pre-order on April 10 and hits Apple Stores in Australia, Canada, China, France, Germany, HK, Japan, the UK and the US on April 24th.

“Are you ready for the Apple Watch?” was first published in The Philippine Star on March 16, 2015 as part of my regular Gadget Week column. The Philippine Star Technology Section is printed every Monday, and is also available as a digital download from digitaledition.philstar.co